How Dogs Experience the World Through Their Senses 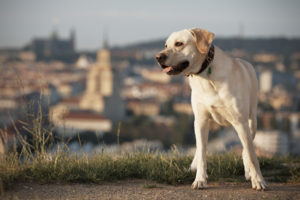 Although we share the world with our canine companions, how we experience the world can be very different. For example, you may have heard that dogs only see in black and white or that they have poor sight but great hearing. The truth is actually more complicated. Dogs mainly use sight, sound, scents and body language. They use these senses to evaluate the world around them.

It is true that dogs perceive less of the color spectrum than humans. With two color-sensing cones to a human’s three, a dog’s eyes can’t perceive red and its relative hues. The sharpness of a dog’s vision is also lower. In general, canine eyesight is around 20/75. A human with 20/20 vision can see up to 75 feet clearly, while a dog can see up to 20 feet clearly.

Dogs are far better at motion detection, however. They can sense movement from a distance 10 to 20 times better than people. The canine eye has more rods, light-sensitive cells, than the human eye. Rods fill their retinas and give dogs superior motion detection in all variations of light and darkness. The surface at the back of a dog’s eyes reflect light back out, not only making them shine strangely at night, but also making canines better navigators in the dark. Combine all this with greater peripheral vision than humans and it’s no surprise that dogs are natural hunters.

Sense of smell is where dogs shine. Humans have roughly five million scent sensors in their nose. Dogs have anywhere from 100 to 300 million, giving them a sense of smell believed to be 1,000 times more receptive. It’s why dogs are so successful at sniffing out drugs, explosives, survivors of accidents and even some types of health concerns.

Despite being much smaller overall than a human’s brain, the canine brain devotes a substantially larger area to analyzing smells. The vomeronasal organ in a dog’s nose detects pheromones from other animals. That ridiculous amount of time your dog spends smelling one small patch of grass is giving him information you can’t imagine: the gender and health of other animals who urinated there, the critters living beneath the ground, even the mental condition of the area’s previous visitors.

Although the difference is not as pronounced as with smell, dogs do have stronger hearing than people. Both species hear 20 hertz at the low end, but dogs hear up to 45,000 hertz versus 20,000 for humans. This perception lets canines hear prey animals that communicate in higher octaves. Dogs also locate the source of a sound better than people.

Dogs have 18 or more ear muscles that allow them to control their ears. These muscles allow them put their ears in the ideal position for superior hearing. Their movable ears detect sounds faster and at a greater distance, explaining why they react to things you don’t even see.

Other senses are less prominent for you furry friend. Your sense of taste is much more developed than your dog’s. Humans have roughly six sensors for every one of his. Dogs have a powerful sense of touch with many receptive nerve endings, but the sensitivity varies from dog to dog. Canines are also very reactive to body language, both from other dogs and humans. They express sadness, happiness, fear, nervousness and anger through their ears, tail, legs and eyes and often perceive those emotions in others using the same cues.

To help enhance your dog’s cell, gland and organ function, add a superior nutritional pet supplement to their daily diet. The high quality, highest quality ingredients in NuVet Plus are joined in a synergistic formula that improves quality of life for your canine companion. Learn how NuVet Plus can help put your pet on the path to perfect health at nuvetplus.com.