Fun Facts about Dogs and Cats You Didn’t Know 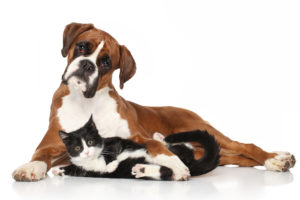 It’s easy to think of your pet as a miniature person covered in fur. Sometimes the human-like attributes you apply to your four –legged companion aren’t too far off the mark. Other times, though, you couldn’t be more wrong. Here are some fun facts about pets that illustrate how alike and how different humans and their companion animals are. For more fun facts about pets, follow @NuvetLabsOfficial.

• A dog’s intelligence is about the equivalent of a 2-year old child’s. Both understand 200-300 words and hand gestures.

• Five minutes is the extent of a dog’s memory. It’s why yelling at him for something he did an hour ago doesn’t make sense to him.

• Often involving their ears, dogs can make up to 100 facial expressions.

• You may love to give your pup a hug, but most dogs interpret a limb over their bodies as a sign of dominance.

• Most dogs can run up to 19 mph, but greyhounds hit speeds of 45 mph, making them the fastest dogs on earth.

• A dog’s normal body temperature is between 101 and 102.5 degrees Fahrenheit.

• Canine nose prints are unique and identifiable, like a human fingerprint.

• About one million dogs have been named as the main heir to their owners’ estates.

• Puppies generally have 28 teeth, compared to the 42 teeth normal adult dogs have.

• Humans and dogs both sweat to regulate their heat. However, dogs only sweat through the pads of their feet.

• Dogs have three eyelids. Not one, not two, but three! An upper lid, lower lid, and third lid.

• The canine sense of smell is 10,000 times stronger than that of humans.

• Cats don’t sweat – they don’t have the glands.

• Felines make over 100 vocalizations, but they meow almost exclusively at humans.

• Front paws have five toes, but back paws only have four. Your cat is either right- or left-pawed.

• When a cat reaches 15 years of age, he’s slept for roughly ten of them.

• Like dogs, every cat’s nose print is unique. It can be compared to a human’s finger print.

• Cats enjoy hearing you talk, especially when you say their name.

• Feline kidneys are able to filter out salt, allowing them to drink seawater and stay hydrated.

• When kittens sleep, their bodies release a growth hormone. They begin dreaming at one week of age.

• Domestic cat’s are recorded to run up to 30 mph. That is 2.2 miles faster than Usain Bolt!

The above fun facts show us that we share many similarities with our beloved furry friends. For example, felines and canines can benefit from a daily  nutritional supplement, just like us!

A nutritional deficient is often a main cause of health issues in cats and dogs. NuVet Plus for dogs & cats helps provide nutritional support for optimal health. As true “pet people”, we have used our passion for pets to produce the best nutritional supplement available. You can learn more about NuVet Labs as a company and about our mission to support pet health at NuVet Labs Overview.